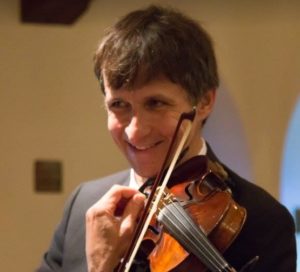 THIS EVENT HAS BEEN POSTPONED. CHECK BACK SOON FOR THE NEW DATE.

The Ballard Chamber Collective, a quartet comprised of professional musicians (and neighbors) Ari Isaacman Beck, violin; Jaroslaw Lis, violin; Nicholas Borghoff, viola; and Ignacy Gaydamovich, cello; return to the porch for an evening of selected chamber works. The program will include Mozart’s Quartet in D Minor K421 by Wolfgang Amadeus Mozart, and String Quartet No.2 op.35a by Anton Arensky.

In person tickets  |  $20 per person
Seating is limited and we strongly advise attendees to purchase tickets in advance. Any available tickets sold at the gate will be by credit card only.

Violinist Ari Isaacman-Beck, originally from Minneapolis, is the first violinist of the Philadelphia-based Dalí Quartet, in residence at West Chester University. His playing has been praised for its “impressive, masterful finesse” and “enormous soul and a big, vibrant sound.” Equally at home as a solo violinist and chamber musician, he has performed as a soloist or chamber musician across the North America, Europe, and Asia at venues such as the Concertgebouw (Amsterdam), Tonhalle (Zürich), Jordan Hall (Boston), the Kennedy Center (Washington DC), and Carnegie Hall (New York City).

A passionate educator as well, Isaacman-Beck has served on the faculties of the Sunderman Conservatory at Gettysburg College, Yellow Barn Young Artists Program, New England Conservatory, and Junior Greenwood Music Camp; he has given masterclasses at the Eastman School of Music, Oberlin Conservatory of Music, and the University of Hawaii, Manoa.

When he’s not practicing, rehearsing, performing, or teaching(!), Isaacman-Beck loves to read, practice yoga, ride his bicycle, and cook, with a particular interest in traditional Italian dishes.

Jaraslow Lis received his M.A. summa cum laude from the Frederic Chopin University of Music in Warsaw, Poland, and was a recipient of the prestigious Polish Ministry of Culture scholarship. As the youngest member of the Sinfonia Varsovia, he has worked with Yehudi Menuhin, Krzysztof Penderecki, and Emannuel Krivine as well as recorded for Denon and Aperto labels. He received an Artist Diploma and Master of Music degrees from the Yale School of Music.  He has studied with Jan Jakuc, Wojciech Malinski, Zofia Kuberska, Julia Jakimowicz, Krzysztof Jakowicz, Syoko Aki and the Tokyo String Quartet, and was a scholarship student of Nathan Milstein (Zurich, Switzerland). He has been a member of the Assai and Essex Quartets, receiving Second Prize at the Fischoff National Chamber Music Competition with the Assai Quartet. He recorded on Roesch Records with Assai Quartet and Ahmad Jamal.  He has been on the faculty of the Madeline Island Music Camp, the Palisade Arts Festival, Friends of Music Camp in South Korea and is a former director of the Music Adventure Camp at Tenuta di Spannocchia in Tuscany. He is currently acting Principal second violin of the Hartford Symphony Orchestra.  He is a chamber music director as well as conductor of the chamber orchestra of Music Academy International in Trentino, Italy. He is on faculty of Connecticut College, Trinity College, and Hartt School Community Division.

Nick Borghoff is currently a member of the Hartford Symphony Orchestra viola section. Growing up in New Jersey just outside Manhattan, Nick was a member of the distinguished New York Youth Symphony for four years, performing regularly at Carnegie Hall. He served as assistant principal of the viola section, and was awarded a chamber orchestra fellowship where he served as principal of the viola section. A dedicated orchestral musician, Nick has also served as principal violist with the Bard College Conservatory Orchestra, and the University of Hartford Hartt Orchestra. He has worked under conductors Carolyn Kuan, Joshua David Gersen, Ryan McAdams, Edward Cumming, Leon Botstein and JoAnn Faletta.

In addition to playing in symphony orchestras, Nick is an enthusiastic performer of musical theatre and ballet. Nick has served as a section violist with Dance-It-Yourself Nutcracker in New York City, as well as a pit musician in numerous musical theatre productions across the tristate area. Nick is a passionate violist, but also spends a fair amount of time performing on flutes, clarinets and saxophones. He has served as a woodwind doubler at professional regional theaters such as Playhouse on Park (West Hartford, CT) and the historic Ivoryton Playhouse (Essex, CT). Nick is also an avid hobbyist, collecting and playing flutes from around the world, including Chinese dizi, Indian bansuri, Romanian pan pipes and baroque recorders.

Nick has studied viola with several treasured performers and pedagogues including ethnomusicologist Dr. Tamara Reps Freeman, Craig Mumm, and Ira Weller. He holds a Bachelor of Music degree in viola performance from the Hartt School, where he studied with the outstandingly inspiring Steven B. Larson.

Polish-Russian-American cellist Ignacy Gaydamovich, is the winner of the Allegro-Vivo competition in Austria and recipient of top prizes at other competitions. As a soloist he performed with the National Radio and TV of Albania, Hartt Symphony, and Manchester Symphony orchestras. He released three CDs, and gave over one hundred recitals in Austria, China, Japan, Lebanon, Panama, Poland, Russia, as well as in the US where he also served as a Visiting Assistant Professor at the Crane School of Music and has been on the cello faculty at Texas Christian University and Mount Holyoke College. Dr. Gaydamovich has received degrees from F. Chopin Music Academy, Texas Christian University, Boston Conservatory, Longy School of Music, and the doctorate from the University of Hartford.