Capital Classics Presents Shakespeare’s “As You Like It: Festive Songs and Famous Speeches” – From the Porch 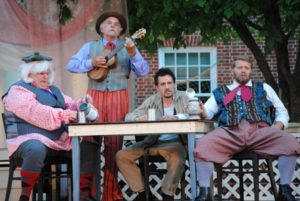 Capital Classics Theatre Company returns with a program of music and merriment: “Shakespeare’s As You Like It: Festive Songs and Famous Speeches,” featuring performances of the songs and famous speeches from Shakespeare’s romantic comedy, As You Like It. Historical and interpretive commentary on Shakespeare, the play itself, and the presented selections will complement the presentation. In addition, Capital Classics will be providing historical information on Shakespeare, commentary on the play, and other fascinating facts to enhance your enjoyment and understanding of their upcoming production.

In person tickets  |  $20 per person
Seating is limited and we strongly advise attendees to purchase tickets in advance. Any available tickets sold at the gate will be by credit card only.

Capital Classics Theatre Company was founded in July 1991 to deliver quality classical theater that is affordable, accessible, and engaging to a diverse audience. The company upholds an artistic vision based on the concept of artful entertainment and serves the community through cultural and educational programs specific in their intent to inspire, teach and entertain. As a residential company, Capital Classics provides job opportunities to Connecticut’s professional theatre artists and jobs and training to theatre students. Since its formation, the company has fulfilled its mission with a varied production history.

Capital Classics now produces The Greater Hartford Shakespeare Festival in partnership with The Arts Center at the University of Saint Joseph, West Hartford, CT. Since 2002, the two organizations have collaborated on: It’s A Wonderful Life: A Live Radio Play (three seasons); The Learned Ladies by Moliere; The Capital Classics’ Greater Hartford Shakespeare Festival, 2004-2019, featuring Merry Wives of Windsor (2004 and 2019); Romeo & Juliet (2005 and 2015); Macbeth; The Comedy of Errors; Hamlet and The Seductive Countess; The Tempest; A Midsummer Night’s Dream; Richard III; Twelfth Night; The Winter’s Tale; All’s Well That Ends Well, Othello; Love’s Labour’s Lost; Pericles, Prince of Tyre; and The Merry Wives of Windsor. In addition to the Festival, Capital Classics has produced The Women’s Writers Series (March 2012) and The CT Classic Writers Series (March 2010) with the University of Saint Joseph.

Capital Classics has also begun to perform selected special events at Hill-Stead Museum in Farmington, CT, such as “Valentine’s Day with Shakespeare’s Love Songs, Scenes and Sonnets” in the Hill-Stead’s Drawing Room, and a presentation of Shakespeare’s Venus & Adonis as part of the museum’s “From the Porch” series.

A new program was developed in 2020, titled Capital Classics’ Contemporary Classics Conversations, presenting online events using contemporary theatre as a springboard for discussion of contemporary topics important to our community. These Conversation events have been held with many organizations statewide, including schools, libraries, online literary clubs, theatres, and the Kennedy Center American College Theatre Festival.

The 2020 Greater Hartford Shakespeare Festival and Radio Theater events were derailed by the COVID-19 Pandemic and the shutdown of performance venues and events by the State of Connecticut. Due to the progress made toward vaccinations and our ability to adhere to safe, outdoor performances, Capital Classics is confident we will be back on the outdoor stage at USJ again in July and August of 2021. The centerpiece of this year’s Greater Hartford Shakespeare Festival will be Shakespeare’s romantic comedy As You Like It.

Capital Classics Theatre Company is the longest-running non-union professional theatre company in the Greater Hartford Region, celebrating our 30th anniversary this year. The growing off-season program maintains the company’s mission in between the larger-scale summer Shakespeare Festival. It provides jobs for Connecticut performers and technicians and provides the community with high-quality theatrical programming that is affordable and family-friendly. It has served as a cornerstone for the development and strengthening of the Greater Hartford theatrical community of small, energetic, quality, professional theaters through the sharing of artistic personnel and resources among the organizations. Several of our past company members collaborate with Hart-Beat Ensemble and Playhouse on Park Theatre Company on theatrical performances and teach in various area professional and educational theatre organizations such as the Greater Hartford Academy of the Arts; the Hartt School of Drama; University of Connecticut; Housatonic and Capital Community Colleges; and Hartford Stage’s Educational Department. Additionally, Capital Classics artistic staff is currently leading the seventh year of a well-attended and enthusiastically received Shakespeare Book Club at West Hartford’s Noah Webster Library, a monthly gathering for discussion of eight of Shakespeare plays.