Rescheduled – A Conversation with Joy Harjo 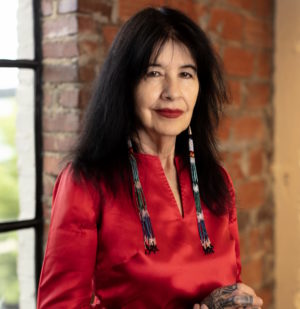 Due to inclement weather, Hill-Stead’s Sunken Garden Poetry Festival will be held on Tuesday, September 15.

For a not-to-be-missed, please join us for an exclusive conversation with Joy Harjo on the West Lawn in advance of the larger closing celebration of Hill-Stead’s Sunken Garden Poetry Festival. Harjo is the 23rd poet laureate of the United States, and the first Native American to hold the position. Poet, writer, and musician Harjo — a member of the Muscogee Creek Nation — often draws on Native American stories, languages, and myths. This separately ticketed event will highlight craft, the writing life, and her role as Poet Laureate. Please bring questions!

At 5 pm, join us for the Sunken Garden Poetry Festival. This event features an interview with Joy Harjo by Connecticut Poet Laureate Margaret Gibson; a performance by singer-songwriter and multi-instrumentalist Orice Jenkins; and a reading by Joy Harjo.
Please note: This event requires a separate ticket. Live stream tickets are available. Learn more

Please check out these must-read picks from the celebrated poets of Hill-Stead’s 2020 Sunken Garden Poetry Festival. Click on a title to be taken to RJ Julia Booksellers to purchase. You will receive a signed bookplate by either Joy Harjo and Mahogany L. Browne, depending on the title purchased.

An American Sunrise
When The Light of the World Was Subdued, Our Songs Came Through
Crazy Brave

Hill-Stead is proud to make the Sunken Garden Poetry Festival accessible. Wheelchair ramps are available, and many volunteers are on hand to assist the mobility impaired. An accessible section is reserved close to the main stage, and a large-print edition of the program book is available on-site.

Hill-Stead makes every effort to ensure that deaf and hard-of-hearing people feel welcome. ASL interpreters are provided at the main Poetry stage (depending on interpreter availability) or by request in advance by calling 860-677-4787 x111.

was appointed the new United States Poet Laureate in June 2019 and is the first Native American Poet Laureate in the history of the position. Joy is an internationally renowned performer and writer of the Muscogee (Creek) Nation and the author of nine books of poetry, several plays and children’s books, and a memoir, Crazy Brave. Her many honors include the Ruth Lily Prize for Lifetime Achievement from the Poetry Foundation, the Academy of American Poets Wallace Stevens Award, a PEN USA Literary Award, Lila Wallace-Reader’s Digest Fund Writers’ Award, a Rasmuson US Artist Fellowship, two NEA fellowships, and a Guggenheim Fellowship. Harjo is a chancellor of the Academy of American Poets and is a founding board member of the Native Arts and Cultures Foundation. She lives in Tulsa, Oklahoma, where she is a Tulsa Artist Fellow.

Orice Jenkins is a vocalist, arranger, songwriter, and multi-instrumentalist signed to independent imprint Truth Revolution Recording Collective. After three remarkably diverse projects, his newest album, Centennial Cole, is a celebration of a great voice from the past: Nat ‘King’ Cole. Released in September of 2019, the courageous body of work has been featured in Jazziz, JazzWeekly, and JazzTimes magazines. Jenkins performed his own soulful arrangements of timeless tunes, similar to his work on his 2016 release, Soar, which reached #11 on the iTunes jazz chart. Jenkins became notorious for his hip-hop laden covers of jazz standards like Bye Bye Blackbird and Body & Soul, as well as his swinging treatments to songs by Drake and Rihanna.

Around The Piano, his 2014 debut, featured original orchestral soul songs written during Jenkins’ teenage years. More of his early songs were released on Tertiary, a 2017 mixtape that featured entirely self-produced music. Both projects were released several years after their inception, partially because of Jenkins pursuing higher education at prestigious arts conservatory, The Hartt School, as well as his work as a music educator in his hometown of Hartford, Connecticut. He also tours nationally with The Afro-Semitic Experience and has served as musical director and arranger for legendary soul singers Betty Harris and Kenny Hamber, as well as Grammy-award winning artist Charmagne Tripp. He has collaborated with rapper Klokwize, Grammy-nominated producer Chris Davis, and shared the stage with jazz legends such as Dr. Eddie Henderson and Stanley Jordan.

Connecticut Poet Laureate Margaret Gibson is a renowned poet, author, and professor emerita. Nationally and internationally acclaimed, Margaret Gibson poetry is characterized by an uncommon diversity.  The voice may be predominantly lyrical and meditative, and yet there are award-winning, book-length narratives in which she fully inhabits the consciousness of her personae.  Gibson herself has said, “Everything is ultimately connected; everything, therefore, is both personal and impersonal. We’re part of an enormous, sometimes painful, sometimes joyful experience of unfolding Consciousness.”

The author of a memoir about growing up in Richmond, Virginia, Gibson has lived for forty years in Preston, Connecticut, with her husband, writer David McKain.  She has taught in many colleges and universities, at the undergraduate and graduate levels, most recently as Professor in Residence at the University of Connecticut from 1993-2006.