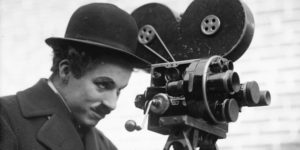 When Theodate Pope resided at Hill-Stead, she often welcomed the community to movie nights. We’ll return to that special time before movies had sound and accompanying music was provided by the local piano player.

This family-friendly evening (or quirky date night!) will be hosted by silent film historian and pianist, Donald Sosin, with live music by his wife, Joanna Seaton, voice and percussion, with Donald on keyboard. This performance will feature a variety of short films, totaling 90 minutes.

Oswald Rabbit was an animated creation by Walt Disney and Ub Iwerks, right before Mickey came along. There are 26 cartoons featuring this intrepid bunny and his pals. Trolley Troubles is one of our favorites.

The great comedian Buster Keaton learned his trade from the delightful Roscoe Arbuckle. They made a number of shorts together before Keaton struck out on his own. Coney Island features great thrill rides and games in the heyday of the great New York park amusement park. With period Coney Island songs sung by Joanna Seaton.

After making fourteen shorts with Arbuckle, Keaton went solo and made nineteen brilliant shorts before turning to feature films like The General and Steamboat Bill, Jr. In One Week Buster and his bride build a house from a DYI kit. It’s still one of the funniest films ever made.

By the time Charlie Chaplin made the twelve two-reelers for the Mutual Company in 1916-1917, he was the most famous man in the world, and one of the wealthiest in show business. Each of these films is a brilliant character study, with split-second timing and great gags that Chaplin improvised while the film was rolling, take after take (unlike Keaton, who worked everything out in advance and had little patience for retakes). In The Count Charlie masquerades as an aristocrat attending a society party, ending in an inevitable wild chase.