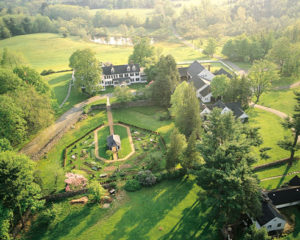 Hill-Stead Museum and its entire 152-acre campus, encompassing nine built structures and landscape features, was approved by the Secretary of the Interior as a National Historic Landmark on January 13, 2021.  The Museum’s 1901 historic house has held the distinction since 1991.

According to the U.S. Department of the Interior and the National Park Service, Hill-Stead, best known for its world-class art and architecture, was among ten sites across the country added to the list. All received recognition as “historic properties of exceptional value to the nation.”

To be listed in the register, a property has to be at least 50 years old and meet at least one of the following criteria: significance in architecture; association with a person of importance; archaeological potential; or significant events in its history. History is a broad area of significance with many categories, including education and conservation.

“Hill-Stead is humbled and honored to be among these ten designated landmarks. Each reveals significant stories of our nation’s diverse heritage through art, architecture, and community,” says Dr. Anna Swinbourne, Hill-Stead’s Executive Director and CEO.

One of the nation’s few remaining representations of early-20th-century country estates, Hill-Stead was the first architectural project of founder Theodate Pope Riddle (1867–1946), one of the first licensed female architects in the U.S., and an early proponent of historic preservation. She designed it for her parents, and the Colonial Revival mansion welcomed members of the Roosevelt Family, Mary Cassatt, and Henry James, who wrote in his 1907 book The American Scene that it was: “…. a great new house on a hilltop that overlooked the most composed of communities; a house apparently conceived—and with great felicity—on the lines of a magnified Mount Vernon.” She went on to design Westover School and Avon Old Farms School and rehabilitate Theodore Roosevelt’s Gramercy Park birthplace. 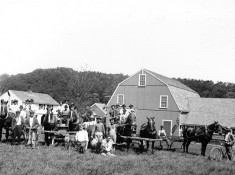 A lover of the natural world, Theodate Pope Riddle’s project started with the land, resulting in an 1898 farm complex inspired by her early experiences traveling with her parents on a Grand Tour of Europe from 1888-1889. During this time, she developed a deep empathy for animals, and a mere decade later, she would fulfill her dreams of creating an innovative working farm at Hill-Stead.

Today, Hill-Stead has brought together a community of over a million visitors since opening to the public in 1947. It continues to innovate as a beacon of creativity with live outdoor art performances, educational offerings, and public and private events.

The beloved house on the hill provides a rare opportunity to be surrounded by world-renowned art while enjoying the expansive estate—an outdoor masterpiece itself. Unique features include a Beatrix Farrand-designed sunken garden, stunning vistas, walking trails, woodlands, and meadows with sheep. 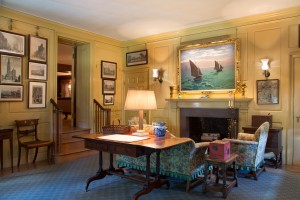 More inviting and intimate than the typical Museum, Hill-Stead gives its visitors a close-up, personal view of renowned masterpieces, textiles, and decorative arts in situ. The impressive artworks live in an intimate domestic setting, as intended by Impressionist artists of the period, who created works to be lived with, and that would enliven any interior. A treasure trove for Impressionist lovers, Hill-Stead’s holdings include paintings by Manet, Monet, Degas, Whistler, and Cassatt that rival artwork found in the world’s major art institutions. One of three museums in the nation with two examples of Monet’s Haystacks, Hill-Stead’s collection includes the artist’s stunning seascapes, an early scene of northern France, and an arresting Mediterranean view.<