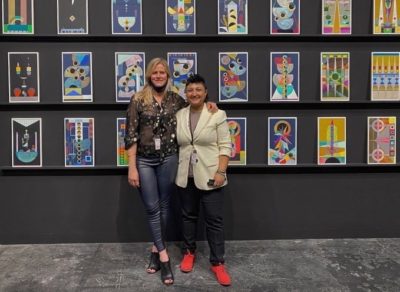 Seeking freedom within oppressive societies, women throughout history have gravitated toward alternative creative and spiritual practices. One such practice is mediumship or communication with the spirit world through a human intermediary. There have been mediums among artists, and since most mediums are women, the history of mediumship in art dovetails neatly with stories of overlooked women artists. Hilma af Klint (1862–1944) is one such figure. A Swedish artist and mystic, she was virtually unknown until 2018, when a revelatory exhibition of her work at the Solomon R. Guggenheim Museum in New York secured her a place in art history alongside male counterparts such as Vasily Kandinsky and Piet Mondrian. Af Klint was inspired to create The Ten Largest—a group of ten massive abstract paintings created in 1907—through a series of séances she held with four other women who shared her beliefs. Known as The Five, they contacted spiritual beings they called The High Ones, who instructed af Klint in her groundbreaking work. 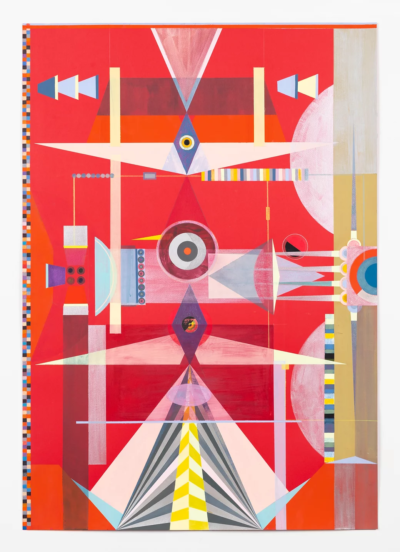 “Have you noticed that what you are looking for is already right in front of you?” 2022, Gouache, watercolor, ink, and colored pencil on Fabriano Murillo paper, 39 x 27 in.

Hilma’s Ghost, named after af Klint, is a feminist artist collective consisting of Brooklyn-based artists and educators Dannielle Tegeder and Sharmistha Ray. The duo makes art collaboratively, conducts free workshops and programs, and engages in research that uplifts ancient and premodern knowledge systems that have been a source of personal strength and aesthetic innovation for women artists. Tegeder and Ray, both independent artists, first collaborated in 2021 on a series of seventy-eight drawings, five paintings, and an original tarot deck titled ABSTRACT FUTURES TAROT. That project—inspired by another overlooked woman artist, Pamela Colman Smith—motivated the duo to imagine new ways of expanding on the tarot’s hidden meanings and to deepen their investigation of the relationship between ritual, magic, and art through abstraction.

In RADICAL SPIRITS: Tarot, Automatism, and Feminist Histories, Tegeder and Ray will explore the creative, spiritual, and narrative potential of tarot, mediumship, and automatism in art-making. In this, they tap into the long-established but overlooked history of these practices at Hill-Stead. The museum’s founder and architect, Theodate Pope Riddle, was a contemporary of af Klint. She passionately supported exploration of the spirit world, participating in séances with notable mediums and funding psychical research. Automatic writing from those séances (and now housed in Hill-Stead’s library), is a core element of the exhibition, which entwines the history of Spiritualism in the Americas and Europe with automatic processes in art. As part of their research, Tegeder and Ray participated in channeling and drawing sessions at the historic house, facilitated by Sarah Potter, a professional witch, and engaged in other ritual and divinatory practices to create five new paintings for the show. These new works recover the lost art of theorem painting, a popular stenciling technique that was taught in girls’ academies throughout New England in the nineteenth century. 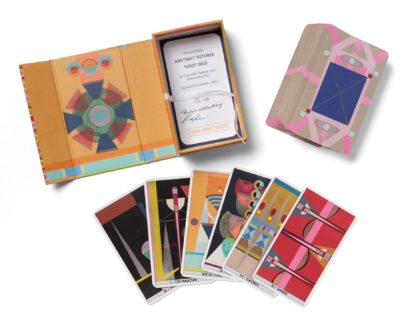 A selection from CHROMAGICK, a recent suite of drawings based on the tarot, will also be on view. Tegeder and Ray pulled cards from their tarot deck for compositional inspiration while also tapping their considerable knowledge of color and pigment to imbue the works with magic. Likening the drawings to “hidden gems,” they harnessed the innate vibrational energy of specific colors and crystals to imagine the works as talismans, each with their own special power. Through ritual processes that accompanied their art-making—including the burning of herbs, sigil making, and crystal, candle, and spirit invocations—the duo mined the potential of divination for their creative process.

RADICAL SPIRITS takes its title from a foundational 1989 book by Ann Braude that considers the importance of Spiritualism to the political liberation of American women in the nineteenth century. Hilma’s Ghost, initiated at the height of the COVID-19 pandemic, reimagines the relationship between the spiritual and the political for a new era of liberation for women, nonbinary, and trans artists. In this way, the collective builds on the ancestral legacies of the powerful women artists who bravely drew on the occult in their work, including af Klint, Smith, Emma Kunz, and Leonora Carrington, but also those, like Ana Mendieta and Lygia Clark, who channeled the shamanic healing power of art for themselves.

ABSTRACT FUTURES TAROT, the tarot deck by Hilma’s Ghost, will be available at the museum’s shop during the exhibition.

This exhibition is made possible by the generous support of DesignSourceCT.

Entry to the exhibition is included in the general admission ticket to the historic house. Purchase tickets in the Museum Shop.

Not a Member?  JOIN NOW