Birth of an Architect

While attending Miss Porter’s School 1886-1888, Theodate Pope was charmed by the Village of Farmington and its 18th-century homes. She had long dreamed of living on a farm when she began to sketch and make notes on buildings and scenes she encountered on a Grand Tour of Europe with her parents. She was enchanted by the beauty of the English countryside, the Cotswold vernacular, and Tudor styles.

During the tour, Theodate was trying to decide what to do with the rest of her life. She contemplated perhaps being an artist or writer. At some point her father suggested she consider studying architecture.

Jan 26, 1889: I am quite interested in Papa’s sugestion [sic] of my studying architecture.

Feb 13, 1889: My interest in architecture has lasted perhaps two weeks (may it last as much longer). I mean to read up on the subject.

From this point on, there are regular entries in her diary during the grand tour where she noted that she spent time working on plans for a farmhouse. In conversation with her father about her future, they talked about his desire for a farm and Theodate’s dreams of managing it. Though the Cleveland farm never materialized, this is where the seeds for Hill-Stead were planted.

Shortly after returning home from the Tour, she moved out of her parents’ home in Cleveland and returned to Farmington, with her parents’ blessing. She rented, and eventually purchased, an 18th-century saltbox she christened “The O’Rourkery” (after its original owner James O’Rourke). She spent several years restoring her first home, and thus began her practical training as an architect.

Over the next 20 years she pursued various commissions and projects on which she lavished her considerable talent and resources. Theodate became a licensed and registered architect in both New York and Connecticut, and a member of the American Institute of Architects as well as other professional organizations. The main focus of her work was centered on private homes and schools with a smattering of civic projects here and there.

Hill-Stead: The “great new house on a hilltop” 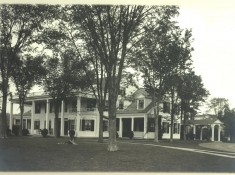 Hill-Stead was Theodate’s first complete architectural project. Once she convinced her parents to leave cosmopolitan Cleveland for rural Farmington, her father purchased tracts of land on the hill behind The O’Rourkery, and ultimately amassed 250 acres. With his approval, while traveling in Europe, Theodate wrote to the distinguished New York architecture firm of McKim, Mead & White, and submitted her plans for a country home.

September 17, 1889: I am writing for and in the interests of my father. We have now decided instead of having you submit sketches to us, to send you the plans I have been working [on] for intervals for some years … Consequently, as it is my plan, I expect to decide on all the details as well as all the more important questions of plan that may arise. That must be clearly understood at the outset, so as to save unnecessary friction in the future. In other words, it will be a Pope house instead of a McKim, Mead, and White. 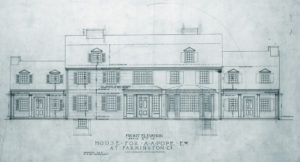 The result was a grand country home modeled on the New England vernacular of connected farm house and barn. Theodate’s inspiration came from her interest in the Colonial Revival, her desire to craft a blank canvas upon which her father’s art treasures could be displayed, and the need for adequate space for her parents’ frequent entertaining.

Spacious rooms that flow into one another, formality with a slightly “unbuttoned country aire,” details that speak to an earlier era such as Dutch doors, beamed ceilings, and fireplaces equipped with trivets upon which one could conceivably heat a kettle of water for tea (even though there was a household staff of nearly a dozen waiting to tend to their every need) speak to an earlier age yet are harmonious with the many modern conveniences, such as fully plumbed bathrooms—one for every bedroom, newfangled linoleum flooring in the kitchen and pantry areas, central heating and cooling systems, and, within a few short years, electric lighting throughout.

Alfred and Ada Pope moved into their “great new house on a hilltop,” as American novelist and occasional house guest Henry James would later describe it, in June 1901. The name refers simply to a homestead on a hill.

February 3, 1901: This evening mother came down to my room & we planned how our note paper for the new home will be stamped. We have decided to call the place Hill Stead–I thought of it early in the building & mother has always liked it while father is lukewarm but suggests no other.

“It is one of the few houses of the period that has been completely preserved…making it perhaps the finest colonial revival house, and museum, in the United States….[and] it is one of the earliest American country houses that can be called Colonial Revival.”
– Mark Alan Hewitt, The Architect and the American Country House, 1890-1940 (1990).

Scholarly and refined, modern and old

Almost immediately, the house was featured in prominent architecture magazines of the day such as Architectural Review (November 1902), and The Architectural Record (August 1906). Photo spreads and lengthy articles detailed the scope of the home’s design elements, the way it seamlessly fit into the local neighborhood, and the breadth of the collection of artwork and furnishings within the walls. Architectural historian and critic Barr Ferree wrote in American Homes & Gardens, February 1910, “A modern house in Farmington is so much an anomaly as to be quite unthinkable.” Hill-Stead was, however, “precisely the kind of house one would naturally look for …with detailing of the most careful kind, a house that is at once scholarly and refined, modern and old…it has seldom been done so well.”

Though it was Theodate who created the plans for a house as remarkable as the treasures within it, as a just-launched designer, and young woman, she was only given credit for “zealous assistance…to whom much of the interior treatment is due” in the same article. Today, with her professional accomplishments fully documented, the 1901 achievement for her parents is all the more remarkable.

September 14, 1900: My interest in architecture has always been more intense than my interest in any other art manifestation, and on my word I think it is not dead yet– not quite. If I only knew how to help the cause of good Architecture! But I am tired of seeing these fluted flimsy highly colored hen houses going up– and am tired gnashing my teeth over them.

Hill-Stead’s most iconic architectural feature, the Mt. Vernon-style portico was added in 1902. We know from diary entries and a photograph that Theodate saw George Washington’s plantation home in March 1901 just as her mother was, no doubt, directing the finishing touches on interior appointments and readying the house for occupancy. The earliest pictures of Hill-Stead, without the portico show a much more farmhouse-like structure. The six columned structure with Chippendale balustrade provided the sense of elegance and formality the house required. The only subsequent changes from the original design were minor adjustments here and there and a small addition at the north side in 1907.

Architectural historian James O’Gorman wrote “Theodate Pope’s biography and lack of formal training do not fit easily into the traditional pattern of the professional architect of the early twentieth century. That makes her achievement all the more noteworthy and none the less real. Many an architect has had to wait for years of experience to accomplish work of the personality, quality, and importance that she saw rise from her ideas on the knoll at Farmington.” From the essay “Hill-Stead and Its Architect,” Hill-Stead: The Country Place of Theodate Pope Riddle (Princeton Architectural Press, 2010).