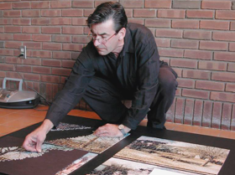 Explore the game of golf as it was played at the turn of the 20th century and enjoyed by the Pope family. View vintage golf equipment, artifacts, clothing and art on loan from the United States Golf Association Museum, Connecticut Historical Society, Fairfield Museum & History Center and a private collector. An audio component will present a first-person account of golf through the eyes of Alfred Pope, drawn from archival documents. Outdoors, view a recreation of a period tee.

This special exhibition of Broadway costumes throughout the historic house is on view from September 21 through January 1, 2018. It honors the Pope Family’s enjoyment of literature, poetry and live performances, particularly theater and opera.

The time period of the shows featured mirror the years 1901 to 1946 when the Pope family resided in Farmington and features vignettes of costumes with accessories and archival ephemera. View magnificent costumes from shows such as Showboat, Anything Goes, Pirates of Penzance, Carousel, and Kiss Me, Kate, as well as lesser-known productions. Original theater programs on loan from the American Musical Theater Collection at Yale University Library and period sound recordings will add an extra dimension to this unique experience throughout the museum.

In celebration of the Sunken Garden Poetry Festival’s 25th Anniversary, the historic Libraries will be transformed into a contemporary sculpture gallery to showcase Boundless: Altered Books in Contemporary Art, guest-curated by Carole Kunstadt, a graduate of the Hartford Art School. Installed among the many rare first editions and early volumes in the Pope family’s personal library, it is an exhibition of altered books by three contemporary artists: Carole P. Kunstadt, Chris Perry and Erin Walrath.

Boundless presents three unique approaches to transforming and exploring the malleability of the form, creating new structures and experiences of the codex. Using found books as their medium, the artists give new life, meaning and relevance to the source materials. Through each artist’s process of deconstruction and recreation, the pages and spines are layered, cut, stitched, molded, stacked, drilled, shredded, woven and gilded. In re-imagining both the content and the context the resulting works reshape our relationship with books. they entice us into a world intriguingly familiar yet previously unknown. The written texts are re-imagined into a boundless world of new associations, altered memories and rekindled responses.

Contemporary Art in Context at Hill-Stead

While the Modern Art of Alfred Pope’s day and Contemporary Art of the 21st century appear to be worlds apart, both are grounded in the principle of venturing beyond accepted norms and attempting to convey an understanding of the times. Modern Art referenced the past and with this reference and appropriation, it attempted to understand the “present time” of a century ago. Contemporary art also aids in understanding the present that today.

Alfred Pope was drawn completely to the then-radical works created by the French Impressionists and during his lifetime continued to stay abreast of the evolving art world. While Pope did not venture to collect works of the subsequent “isms” such as Post-Impressionism, Expressionism or Fauvism. However, he did view such works and we can surmise he did so with an open mind. In the last year of his life, 1913, Pope attended the International Exhibition of Modern Art in New York City, commonly known as the Armory Show. Here he would have viewed artworks on the cutting edge. Among the featured works was Marcel Duchamp’s Nude Descending a Staircase, once referred to as “an explosion in a shingle factory.” While we do not know precisely what Pope thought of his experience at the exhibition, we do know that he hoped a young friend, also an a art collector, would be able to see the show before it closed.

Had Alfred Pope lived a few generations later, would his Hill-Stead of the late 20th and early 21st century have included an altered book as sculpture amidst his other treasures?

Like all private libraries, the one at Hill-Stead tells us about the people who lived in the house, where the books so clearly illuminate both their owners and the times during which they lived. These volumes, like the house itself, combine nostalgia for the past with concern for the problems engendered by the industrial development which made the house and collection possible. The lives the Pope family led – from New England Quaker simplicity to Midwestern prosperity and European influence in the first generation, to Theodate’s progressive and wide-ranging awareness of her times in the second generation – mirror American influences during the mid-nineteenth century through the years of the Second World War.

More than 3,300 volumes of books are contained within Hill-Stead and represent literary classics, important first editions, and works on specific subjects such as art and architecture, politics and reform, travel, world history and spiritualism. Most of the book collection is housed in two period rooms known as the First and Second Libraries. Highlights of the book collection include a first edition of Francisco de Goya’s The Disasters of War, published in 1863 in a limited edition of 500 copies and containing 82 engravings; a first edition of James Joyce’s Ulysses, published in 1922 in a limited edition of 750 copies; Samuel Johnson’s Dictionary of the English Language, published in 1755; John Ogilby’s America, Being the Latest and the Most Accurate Description of the New World, published in 1671; and sets titled The World’s Best Literature, Dictionary of Authors, and History of English People. Carole P. Kunstadt dissects, stitches, weaves and gilds book leaves savoring the aged qualities of the paper and text while reminding one of the personal associations to knowledge and history, and the passage and compression of time. Intimate in scale and intention the sculptural objects are a vehicle for the exploration of life’s vulnerabilities and a platform for sanctity and contemplation. Chris Perry‘s book constructions elegantly invite us into an ordered, fluid, textural and structural experience. Cascading paper, layered or spouting from a stack of volumes, mimics and implies the focus on water and our environment. Reductive and additive elements find a balance in Perry’s works suggestive of the balance needed on Planet Earth. Erin Walrath‘s nest-like forms entice as well as excite the eye with their organic shapes thick with fragments of font, text, fiber, color in partly recognizable book covers and spines. One finds a refuge in their densely-layered and textural structure; as well as a joy in discovering these hybrid forms.

Boundless is exclusive to the Hill-Stead Museum and is guest curated by Carole P. Kunstadt in collaboration with Melanie Bourbeau, Curator & Director of Interpretation and Programs and Susan Ballek, Executive Director, Hill-Stead Museum.