Monday Night at the Opera in the Garden! – From the Porch 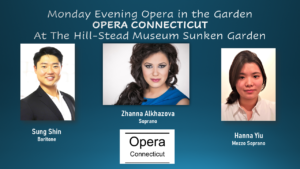 Opera Connecticut returns to Hill-Stead’s Sunken Garden with their cadre of talented sopranos, tenors, mezzos, and basses, for an evening of favorite selections from operas old and new.

In-person tickets  |  $20 per person
Seating is limited and we strongly advise attendees to purchase tickets in advance. Any available tickets sold at the gate will be by credit card only.

Sung Shin is a young Korean-American lyric baritone currently completing his bachelor’s degree at the Manhattan School of Music. He is the Director and Founder of Opera under the Arch, a group of young singers and pianists who perform opera arias and scenes at New York City’s Washington Square Park, most notably under the famous arch. Roles include Dr. Falke (Die Fledermaus) with Queens College Opera Theatre, the title role in Don Giovanni with Manhattan Opera Studio, and Papageno (The Magic Flute) with New York Lyric Opera. Upcoming performances include scenes of Le Nozze di Figaro with the Dell’arte Opera Ensemble and Guglielmo (Così fan Tutte) with New York Opera Forum.

Soprano Zhanna Alkhazova has most recently made her debut in the title role of TURANDOT with NJ Verismo Opera. Of this performance Opera News’ David Shengold wrote: “Zhanna Alkhazova wielded a bright, sword-flashing sound.” In her young career she has already performed the title role in TOSCA with Martha Cardona Opera Theater, the title role in IOLANTA with Commonwealth Lyric Opera and NEDDA in I Pagliacci with New Rochelle Opera. Ms. Alkhazova has sung with Des Moines Opera, Opera New Jersey, Opera Boston, Long Island Opera and others. An active concert artist, she performed in Lincoln Center as part of the Chinese New Year Celebration Recital Series and in Carnegie Hall, as a Barry Alexander Vocal Competition winner. Internationally, she has sung in Italy, Ireland, Canada and Russia, where she headlined a critically acclaimed recital tour. She is a frequent featured soloist with the Refugee Orchestra Project and has been featured on the cover of a Russian-American magazine. Ms. Alkhazova was most recently awarded top prizes in the NJ Verismo Opera Competition. Other awards include top prizes in the Barry Alexander International Vocal Competition, the Arkadi Foundation Competition and the Rhode Island NATS Competition. She was named finalist in the Career Bridges Competition, Kaliningrad International “Nightingale” Competition and a semi-finalist in The Montserrat Caballé International Singing Competition and the Elizabeth Connell International Competition for Dramatic Sopranos. Originally from Moscow, Russia, Ms. Alkhazova grew up in the New England area where she completed her studies, graduating with a Master of Music Degree from Boston University.

Hanna Yiu, Mezzo Soprano, received her Bachelor’s Degree from the Manhattan School of Music in 2019 and is just beginning her opera career.