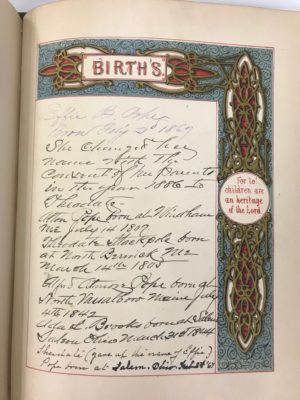 February marks the birth month of our founder and architect, Theodate Pope Riddle (b. 2/02/1867). However, we did not always know her actual birthdate—the grave marker and death certificate list her birth year as 1868. For the first few decades of the Museum’s opening, the Hill-Stead story began with Theodate’s birthday as February 2, 1868.  It was not until years later that we learned her actual birthdate.

The Pope family bible, which served as a record keeper; and which was collected by Polly (Pasternak) Huntington and Sandra Wheeler while establishing the Museum’s archives in the 1980s, notes Theodate’s correct birth year, 1867, as well as her birth-given name, Effie. This led to a search for other documents with her recorded birthdates. At least four of which include Theodate’s signed testimony as having been born in 1877!

We can only speculate how this error of 10 years came to be recorded.  However, research by Sharon Stotz eventually revealed that Theodate’s dear sister-in-law Grace Flandreau, wife of her husband’s half-brother, Blair, made the original error. Grace was the “informant” for our founder’s death certificate.

February also marks the month Theodate and her mother, Ada Brooks Pope, officially named their new home on the hill. Theodate wrote in her journal dated February 3, 1901: “We have decided to call the place Hill-Stead– I thought of it early in the building & mother has always liked it while father is lukewarm but suggests no other.”

Of course, February is beloved for Valentine’s Day. Theodate and her husband John celebrated the tradition with poems and cards. As shown here, Theodate did the same for her mother in 1918. “The fairest lady and most dear, I chose to be my Valentine, whose charms increase with every year; I love you best, dear Mother mine.”

We wish you and yours a Happy Valentine’s Day!