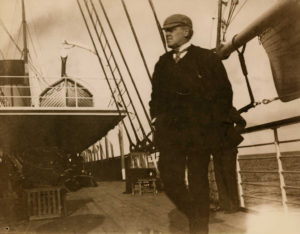 Alfred Pope: An Evolution of Ingenuity illuminates a long-overlooked figure in the history of Hill-Stead and of American art collecting. Through this exhibition and accompanying catalog, we present Alfred Atmore Pope (1842–1913) as a bold and leading collector of European modernism and position him rightfully among his peers. Further, the endeavors position Pope as a multifaceted figure and elucidate his devoted and generous service to others, indelibly influencing his only child, Theodate Pope Riddle (1867–1946), in her pioneering life of creative and philanthropic work.

The research for this exhibition identified artworks previously unknown to Hill-Stead, such as Alfred Sisley’s La Serpentine à Londres, and revealed significant archival information about those already documented. In particular, we focused on the rapidly growing body of evidence about the ways in which Theodate’s previously unknown activities impacted our understanding of her father’s original, and by extension, Hill-Stead’s current collection. These exciting findings present a more comprehensive and nuanced picture to explore and interpret Pope as a collector.

During his active collecting years (1889–1907), Pope acquired over 40 important works of art and thoughtfully pruned his collection through sales and exchanges, retaining only those works that elicited a profound emotional response. Since Theodate, too, sold several paintings, in order to finance her own projects, only a small fraction of the original Pope collection remains intact today. Arguably, the finest examples of Pope’s turn-of-the-century connoisseurship still grace the rooms at Hill-Stead.

Alfred Pope: An Evolution of Ingenuity also examines and challenges long-held beliefs about his collecting strategies, practices, and motivations. Pope, who hailed from modest means and had no formal background in the arts, has long been revered as self-taught and ruggedly independent in the building and refining aspects of collecting. It was believed that he acted without relying on an advisor in any official capacity. American artists Mary Cassatt and James McNeill Whistler were both close friends and represented in Pope’s collection, and both tried to exert influence. To date, scholarship has shown that Cassatt indeed did.

Together, the show and catalog offer the first-ever comprehensive study and presentation on Alfred Pope, complete with a biography and a holistic assessment of his collecting pursuits and accomplishments. Through examination of his correspondence, together with consideration of the entirety of his collection, both the works in this exhibition that were divested for myriad reasons and those that were retained and now comprise the museum’s permanent collection, we elucidate an unprecedented understanding of this important historic figure.

This project was launched in autumn 2020 with preliminary research that yielded fascinating insights into Alfred, Theodate, and her decisions after his death to sell his art. Ultimately, Theodate single-handedly shaped Hill-Stead and distorted Alfred’s legacy. We are proud to share these story-altering discoveries and finally celebrate both with greater understanding and knowledge.

This exhibition is made possible by the generous support of the Edward C. and Ann T. Roberts Foundation.